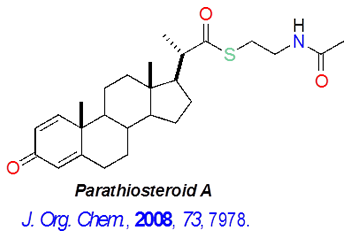 We carried out the chemical synthesis of some of natural products that we have isolated as well as their analogues in order to determine structure-reactivity relationships (SAR studies) and to optimize its pharmaceutical properties (increase its biological activity and decrease its possible side effects).

Illustrative examples of this line were the synthesis of several cytotoxic steroids from marine origin: preparation of a large number of cytotoxic analogues of the hydroxyimine steroids which we had isolated from a sponge of the genus Cynachyrella, synthesis of the natural cytotoxic parathioesteroids A-C, isolated from the soft coral Paragorgia sp., along with several analogs, as the first natural steroids bearing a C22 thioester in their side chain, and preparation of a new cephalostatin/ritterazine analogue which is one of the most potent antitumor compound, from the commercially available hecogenin acetate and the natural cytotoxic steroid 22-epi-hippuristanol that we have isolated from the gorgonian Isis hipuris.
We completed the total synthesis of the tetrachorinated dipetide dysithiazolamide which was isolated from a sponge of the genus Dysidea, the nitrogenated compound acetyl homoagmatine obtained from the sponge Cliona celata and the nitrogenated terpene (-)-4-epiaxinyssamine which is an epimer of the cytotoxic and coral-lethal compound axinyssamine isolated from the sponge Axynissa ambrosia. Furthermore, we have performed several synthetic approach to the total synthesis of the cytotoxic alkaloid mycothiazole which was isolated from the sponge Leiosella levis.
In some cases, we were able to develop new synthetic methodologies as was the new method of preparing α-hydroxy-γ-nitroolefins by oxidation of α, β-epoxiketoximes with IBX and application of the metathesis reaction in the synthesis of analogues of natural products such as hydroximinosteroid homodimers and mycothiazole.

Synthesis of natural products and analogues