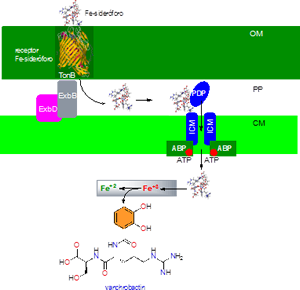 The main goal of this research is the development of new treatments against fish pathogenic bacteria in marine aquaculture farming worldwide.

We are using an approach based on the use of the bacterial iron uptake mechanisms. Iron is one of the most essential nutrients for all microorganisms;; however, iron bioavailability is limited due to the low solubility of iron(III) at physiological pH. In response to this restriction, pathogens evolved high-affinity iron uptake pathways, being one of them the synthesis and secretion of Fe(III) chelators, named siderophores. These compounds are low molecular mass iron-chelating molecules that can remove iron from host iron-binding proteins and then enter the cell through outer-membrane receptor proteins.
Our strategy implies first the isolation and structural elucidation of the siderophore(s) biosynthesized by the pathogenic bacteria. Then, we carry out its synthesis and the preparation of its analogues in order to perform SAR studies and to obtain an derivative with siderophore activity that incorporated appropriate functionality for use an anchor to be attached directly (or via spacers) to other biologically active agents or fluorophores. In this way, we can deliver antibiotics via the bacterial iron uptake systems (Trojan Horse strategy), build fluorescents probes and even prepare vaccines.
We are exploring three of the most important bacterial infectious diseases involved in considerable economic losses in aquaculture, which are:
Vibriosis
From the pathogenic bacteria Vibrio anguillarum, responsible of this fish disease, we were able to isolate and characterize vanchrobactin (Vb) as the second siderophore-mediated system of this bacterium. We have completed its total synthesis and prepared a series of Vb analogues. These studies allowed also finding that FvtA protein is the outer membrane transporter for Vb and its analogues. Three of them maintain the siderophore activity and bear an appropriate functionality (an amino group) that can be used as anchor group to attach it to other bioactive agents. Thus, several Vb analogues-norfloxacin conjugates were obtained for the delivery of antibiotics via the bacterial iron uptake systems (Trojan horse strategy) and their antimicrobial activities have been determined. Furthermore, studies of iron (III) coordination properties of Vb in aqueous solutions using spectrophotometric and potentiometric methods were performed (collaboration with Dr Emilia Iglesias from the Department of Physical Chemistry at UDC). 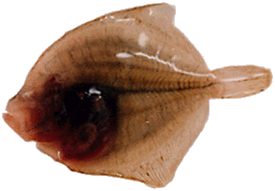 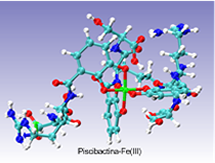 Analysis of the gene cluster involved in the biosynthesis of piscibactin, the siderophore produced by Photobacterium damselae subsp. piscicida as the pathogenic bacteria responsible of this fish disease, allowed the partial prediction of its structure. Then, from the iron deficient cultures we could isolate its gallium and iron(III) complexes along with a possible intermediate of its biosynthesis, prepiscibactin. Finally, their structures were solved by NMR/MS methods and DFT molecular modeling. Furthermore, the results enabled the proposal of a biosynthetic pathway for this siderophore.

Forunculosis
Analysis of the gene cluster involved in the siderophores biosynthesis produced by Aeromonas salmonicida as the pathogenic bacteria responsible of this fish disease, allowed the structural prediction and posterior isolation and elucidation of those compounds. These results including their structures will be published soon.

Siderophores of pathogenic bacteria in fish